Behind the Scenes with Sew Into Sports

Best title, don't you think! The clever Barbara Brackman strikes again. This book is so near and dear to my heart. Barbara and I collaborated on several of the quilts in this book. It contains the most successful fundraiser quilt we ever made, the Jayhawk Shoes Quilt. As usual, she had the vision and discipline to pull that and several other projects over the years into a great book. If you want ideas to make a sports related quilt, this is the book you need.

But the dearest quilt for me is the one I made for my dad (it's on the cover, right below the photo of BB holding a football Lucy Van Pelt style for her brother to kick). Dad played college football at Kansas State University from 1948-1950, wrapping up his career the month before he married my mom. He got clobbered in the mouth in his last game and lost his front teeth (that was in the days before football players wore facemasks, which is always hard to believe). 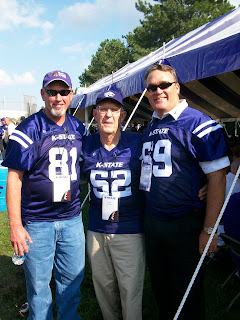 By the time I got to college, most vestiges of that purer age of sport were gone. Imagine players today cleaning the stadium after the game! That's what scholarship players did in Dad's day. But they were local heroes, that has become clear to me in my life. One of the nicest stories anyone ever told me was about how good my dad played. How I would love to see a film of that! But of course, it was before those days too. They barely got still photos of them. Here is Dad (#52) with players from my era: Perry C. Viers (#81) and Garry Spani (#59) (1970s players) at a players reunion last fall. Please note how much BIGGER they are than dad.
Posted by Deb Rowden at 12:37 PM