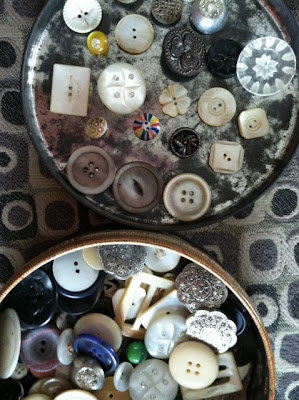 I've written before that I enjoy going to garage sales because generally, everyone is nice. We talk, we poke around the stuff, we dig out our dollars / quarters and take their stuff home with us.

Yesterday, we witnessed our first girl fight EVER at a garage sale. Here's how it happened (please note I refer to this as a girl fight because of the behavior, which reminded me of junior high - these were two grown women):

We had been at a very nice sale for a few minutes - enough time to have already bought a few items. We were milling around to see what else there was. I was at one end of a porch when I heard two women (hereafter referred to as the box-holder and the box-wanter)  talking at the other end. It caught my attention when I heard one of them say, "NO, you cannot look at this!" The box-holder was brandishing a box filled with neatly bagged jewelry. Insults flew. We heard, "You are dressed like a slut!" "You are a country bitch!"  "What country would that be? Not this one!"

The garage sale host and I raised eyebrows. "They are fighting!" one of us murmured, staring in disbelief.

The combatants continued to mill around, hurling insults, box-holder rarely making eye contact with the box-wanter, who finally turned and left, hollering, "I hope you can't afford anything in that box!"

Box-holder then told all assembled that they had encountered each other before and that box-wanter often demanded what someone else had in their hands - which is a no-no in garage sale world. Garage sale host looked at me and grumbled, "Well, she'd better buy everything in that box because she wouldn't share!"

Just then I noticed this lovely tin of buttons. I am sure glad they didn't want that!
Posted by Deb Rowden at 11:36 AM 8 comments: