Scraps again, NOT too small at all 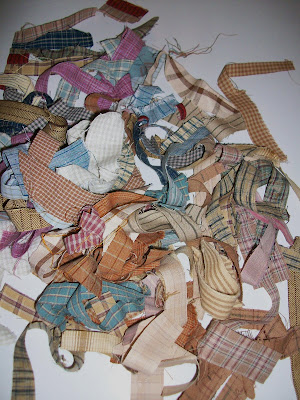 I made some blocks the easy way - I added triangles that were WAY too big and cut them down to size.
SO I had some SCRAPS. They were strips: several inches long, averaging about 1 inch wide.

I resolved I would not save them. No way, I would throw them out......
and as they piled up on my cutting table, I noticed a red remnant sitting right there that would look SO nice with them....so I cut it up. My strips varied in size a little, but ranged from 7/8" to a little over 1 inch wide...

I sewed until I ran out of red fabric. I cut and turned and stitched. The skinnier the strips got, the more interesting I thought it looked.
Here is the little quilt I came up with. I need to trim it, back it and quilt it.
It didn't take long at all.

Remember, there are no scraps too small to save (hardly). Try it! It's like playing with fabric! 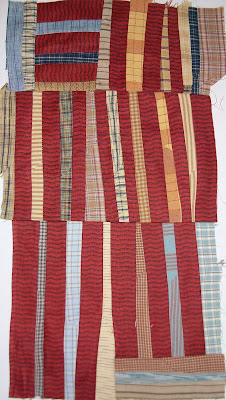 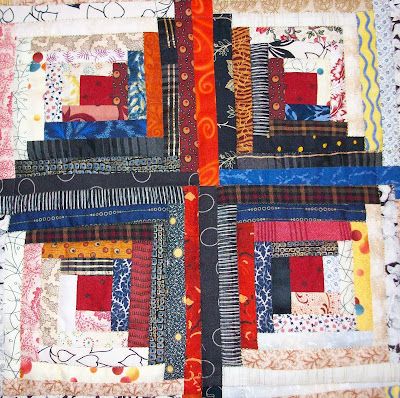 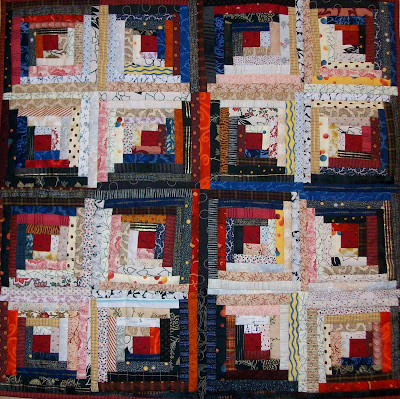 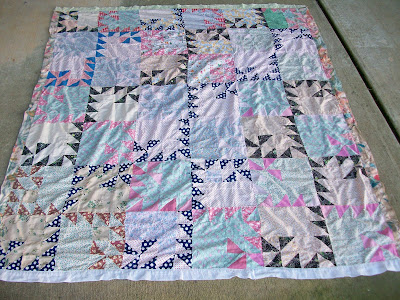 We stopped at a Flea Mall near Birmingham, Alabama where I found this sweet summer spread. The edges are finished but the quilt has no backing or batting. 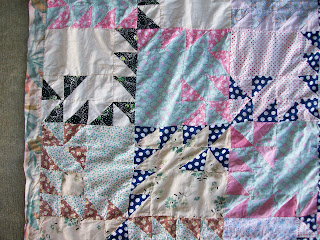 The block pattern is odd but repeated faithfully - I'm eager to see if it is in the Encyclopedia of Pieced Patterns. Many of the pieces are patched together. The fabrics run the gamut - a few conversation prints, several synthetics, some seersucker binding and vintage cottons.


Best of all: it is hand pieced with sturdy string. I'll be repairing a few pulled apart seams as we head north. 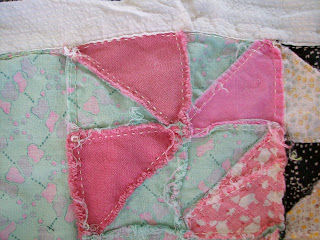 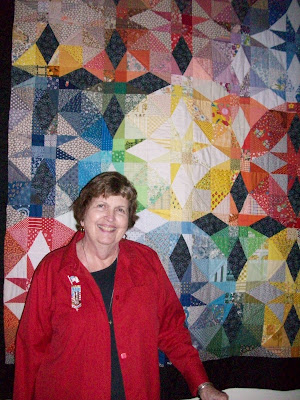 We visited longtime friend and quilter Pat Flynn Kyser at her home in Huntsville, Alabama yesterday. I was happy to see her Color and Light quilt on the wall (made using a Jeff Gutcheon pattern called Judy in Arabia. (A take off on 54-40 or fight.)

I remember when Pat was collecting fabrics for it in the late 1970s. She worked hard to find these fabrics, searching far and wide as we had to do then. Pat said it took her two years to gather all the gradients of color she wanted... and she could do it in a day now with the vast quantity of fabrics available.

She showed me her studio where she’s been doing some expunging lately. 19 bags of fabric left these shelves and went to a good cause. Look up high, you can actually see some empty shelves! 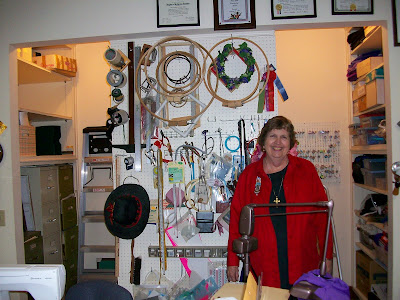 Pat and I have been friends for 30 years. I met some of the most important people in my life at that time.....
Posted by Deb Rowden at 9:51 PM No comments: 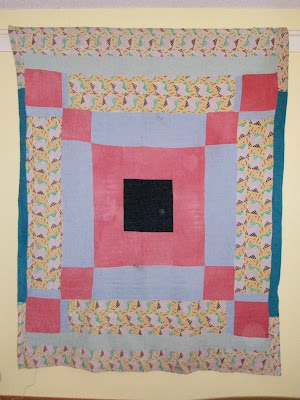 We found this quilt several years ago at the end of a long day of antiquing in central Indiana. My friend Barbara said that is a great quilt and I agreed but I was so tired I almost passed it up. I’m glad I didn’t.

The fabric is a looser woven cotton than the fabrics we buy at quilt shops today. I’ve repaired it – when I bought it many of the scant seams had pulled apart. The colors of those fabrics are very soft, likely faded with time. And it features a black block in the middle.

My friend Frances pushed me to use black as we designed blocks for our 2002 book Quilting a Poem. I would shriek but now I see her wisdom – using black can add so much depth to a quilt. 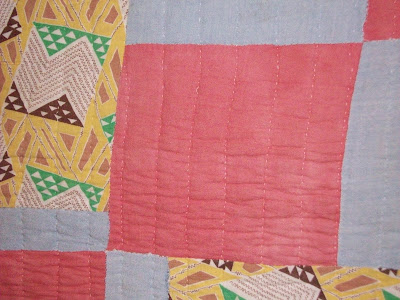 30 dollars worth of fabric 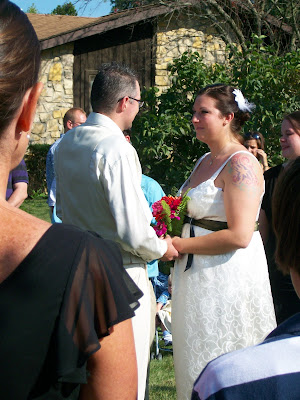 My friend Jan has sewed many wedding gowns over the years. So when it came time to sew her daughter Ashley's wedding dress (plus 3 flower girl dresses), she checked with her considerable fabric stash on hand. It turned out she only needed to spend $30 to make all these dresses!

They had some fun with the dress. It was full length, but they made the skirt detachable with a short skirt underneath. So after a while, Ashley dropped her skirt. 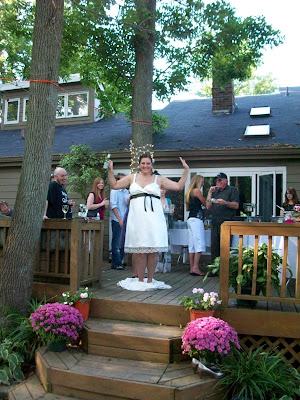 Oh, it was a beautiful wedding on a picture perfect day. Congratulations Jan, and Ashley and James too! Good job, flower girls Ashley and Brooklin! 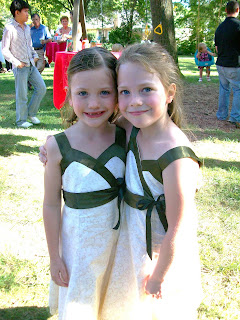 Behind the scenes in Lexington, MO 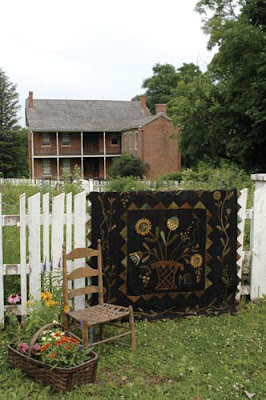 Everyone who was at this photo shoot chuckles when they see this photo.

We were shooting location photos at the lovely gardens at the Battle of Lexington State Historic Site in Lexington. Rain loomed and we were trying to get in all the shots we could before it stopped us.

We all liked this shot BUT found it was hard to keep the bed cover on the fence. If you folded enough over for it to stay up by itself, you lost a good deal of it - and we wanted it all to show.

I offered to crouch behind the quilt and hold onto the little edges so more showed. It wasn't hard, it didn't take long at all.

But everyone who was there who sees it remembers there was a determined middle-aged woman crouching behind it to capture this lovely shot.

Check out this quilt and so much more in Maggie Bonanomi's upcoming Kansas City Star book, Nature's Offerings. It's a beauty.
Posted by Deb Rowden at 8:27 AM 3 comments:

A quilt you can’t get out of your head... 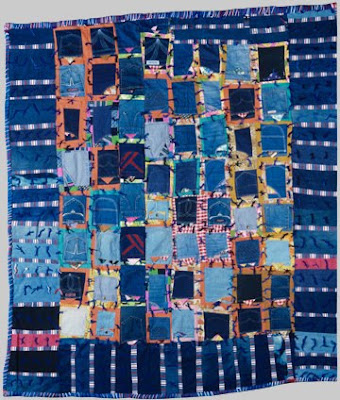 I’m sure you all see quilts that just get you hooked, that you can’t get out of your head (this also happens with songs). Well, it has happened to me with this quilt. A friend sent the picture – she knows it is a Gee’s Bend quilt but can’t recall where she found the picture on the internet. It could be in a museum or collection. I’ve saved it and look at it often. I’ve noticed the center is made up entirely of blue blocks with pockets on them, surrounded by bright colored strips. The border is arranged differently, with blue demin rectangles surrounded by the same plaid fabric. The colors used by this quilter just dance.
Posted by Deb Rowden at 7:30 AM 3 comments: 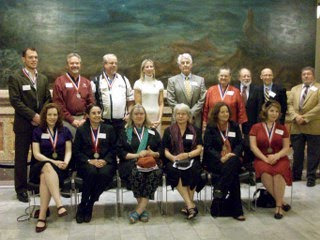 Another behind-the-scenes quilt book adventure:
Yesterday Barbara Brackman and I attended a ceremony in the Kansas State Capitol. Barbara was honored for writing one of the 2008 Kansas Notable Books. She was honored for Making History: Quilts and Fabric from 1890-1970, published by C&T. It is a great book with a great cover quilt (made by yours truly). I edited the book.
The governor's wife, Stacy Parkinson, presented the medals. She is an avid reader with Michelle Obama muscle-y style arms.
Here is a photo of the medal recipients. Barbara is in the front row, third from the left. Stacy is behind her in a white dress.
Posted by Deb Rowden at 10:44 AM No comments:

I visited Knoxville last week. Here are some trip pictures. I love the sign on the restored Tennessee theater in downtown Knoxville. 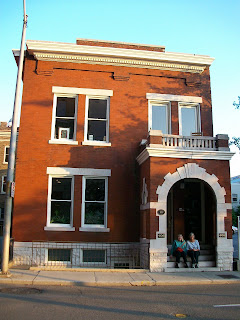 406 Church Street in downtown Knoxville is an important landmark for our host. Merikay Waldvogel (right, above) was Executive Director of the Knoxville Women's Center from 1979 to 1982. They helped women find employment and provided information and referrals to legal and health services. She hung antique quilts throughout the building, and became the go-to person for information on quilts--the source of her "quilt lady" label. And the rest is history . . . 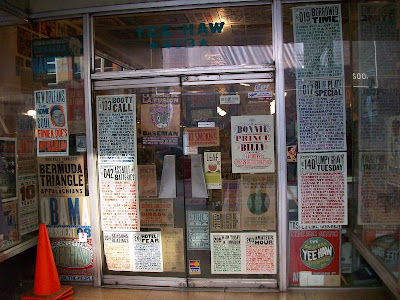 Here is the entrance to a fabulous sign shop in downtown Knoxville, Yee Haw. They hand-print amazing signs, I could have looked around there for a LONG time....

Kudzu threatens to overtake this surprised quilter. The leaves were bigger than our hands! 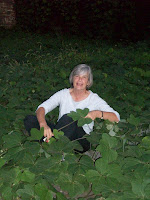 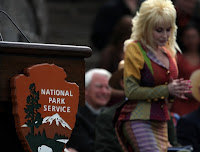 Dolly Parton was in town too, singing and wearing this remarkable suit.

Our Lawrence (Kansas) Journal World obituaries can't hold a candle to that. 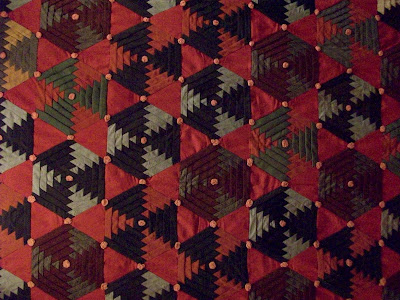 Merikay's home is filled with wonderful quilts (this is one of many). We had a great time!
Posted by Deb Rowden at 11:10 AM 2 comments: 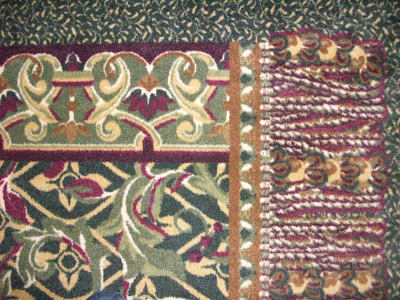 When I stay in hotels, I always notice how VERY different carpets are there. This one even had fake fringe!

I notice bold design and you must admit, hotel carpets are always very bold. And you must admit they would bear public use well and not show stains and wear like our very plain home carpet.

I was curious - surely there is carpet marketed specifically for hotels.
Sure enough, google supplied many examples.

These people call it hospitality carpet.

Look at this one, it gives specific examples for lobbies and corridors.
Posted by Deb Rowden at 3:08 PM 2 comments:

A horoscope wish and quilts we did not buy 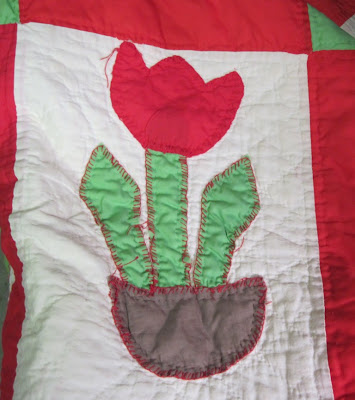 Forget what sign you are today. My horoscope has a wish so good we should all share it:

Today could mark the beginning of an important growth cycle in your life, making you feel more secure and happy about who you are and what you're doing.

So enjoy this wish and enjoy these pics of quilts we did not buy in western Kentucky yesterday, our first day in the deep South. Both were flawed but both were so boldly creative. 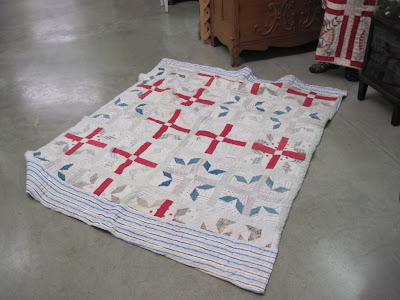 Photos courtesy of the well-charged camera of BBrackman.....
Posted by Deb Rowden at 2:26 PM 1 comment: