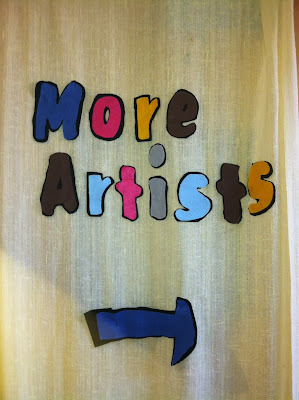 We look forward to our Bizarre Bazaar on the Saturday after Thanksgiving every year. It's a tradition that dates back several decades.


We buy some gifts. We admire the creativity and the wonderful art. Much of the art uses recycled and found materials. Rugs woven from t-shirts. Books made with old baseball cards and album covers. Signs made with cut-up license plates.


And we get lots of ideas. You know what we think: "I can make that!" But of course, there is never time to make everything you want to make ... 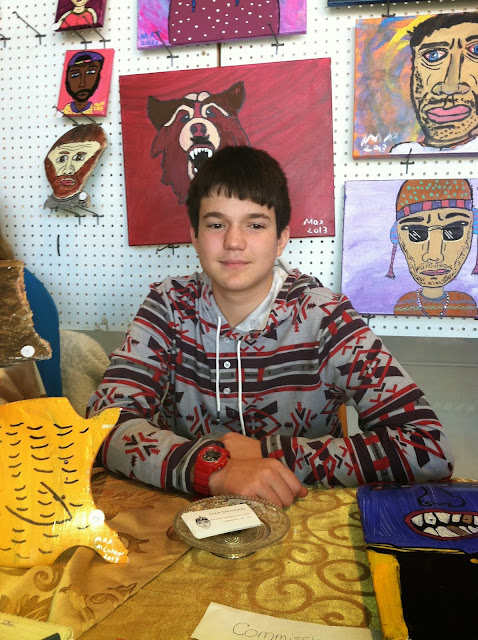 My favorite artist this year was Max McGraw. Max paints on broken skateboards. He's a student at South Middle School and he's been doing skateboard art for two years now. His work has a true folk art feel. This cat had to go home with us. 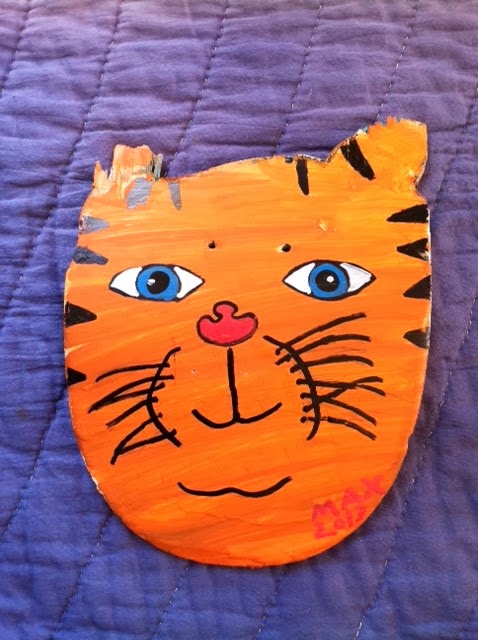 Remember (and if you want to contact Max, email him at maxart785@gmail.com): 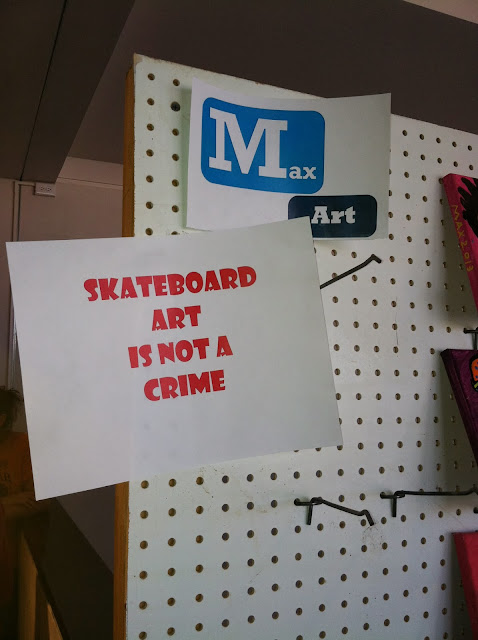 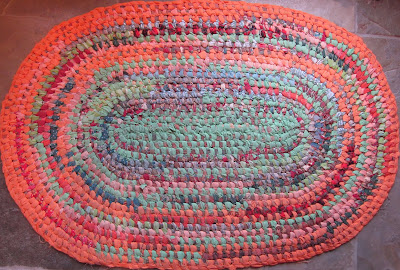 Thanksgiving has become one of my favorite holidays. We get to eat a great meal with people we love and give thanks for all that is good.

Happy Thanksgiving to you! Thank you for sharing my joy for all things textile and thrifty. And enjoy a look at my latest rug, one created for a very colorful entryway.
Posted by Deb Rowden at 5:00 AM 5 comments: 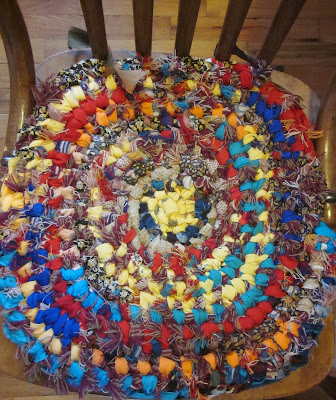 Now this was fun.

My friend Georgann has a colorful new house. I love it. The rooms are painted in bold colors - the kitchen is an especially wonderful warm, buttery gold.She has some nice wood chairs there but the seats needed a little cushioning.

This is a good time to whip out the toothbrush and make a little rug. All you need to do is make a pattern of the seat shape. Start your rug so it is the same shape as the seat and it will fit just fine.

For my runner/base, I used a shaggy woven loom end. More about those soon. The worker pieces were bright colors, some picked by Georgann, some added in by me.

I added one extra row of stitches on the chair front to fill it out.

I love how they turned out. You can make one of these in no time at all! 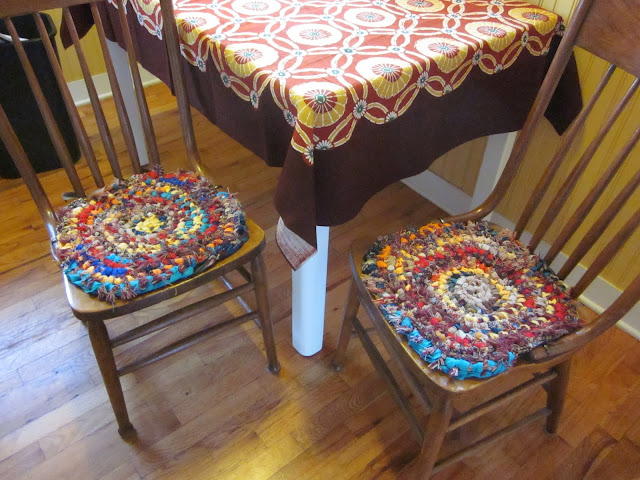 I did an inventory of my fabric by the pound purchases today. I am pleased to report that I was happy with what I picked (which I will admit I quickly picked and threw into the cart, no second guesses).

It was a helluva buy. I got 33 pounds of fabric. That included:

4 sweaters (for a project I have in mind)

knit pants (improbable but who knows)
awesome Austin t shirt (i have it on now, freshly washed)

If you are a confident fabric selector, this is a GOOD BUY!! I am fortunate to live with someone who calls this cheap entertainment. It is certainly that. The washing machine is busy here!
Posted by Deb Rowden at 6:00 AM 4 comments: 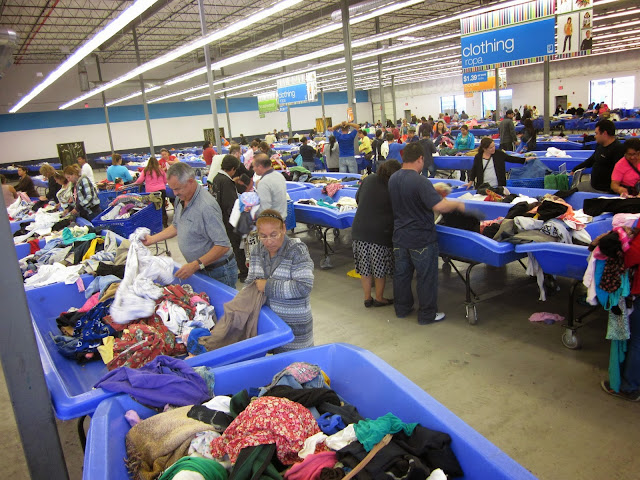 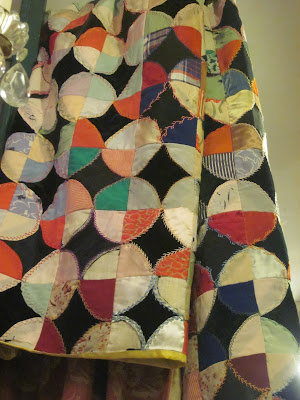 I'm always on the scout for a project I can take with me to stitch by hand. I'm in several stitch groups and you can get a lot done if you have a project ready to work on ...

I noticed this quilt in the antique shop in Austin - ta-da! I think it would be a great take-along project because:

B. I can have the circle blocks ready and do the endless decorative stitching at stitch group. We are working with silk and silk ties these days - won't this be a good project for that. 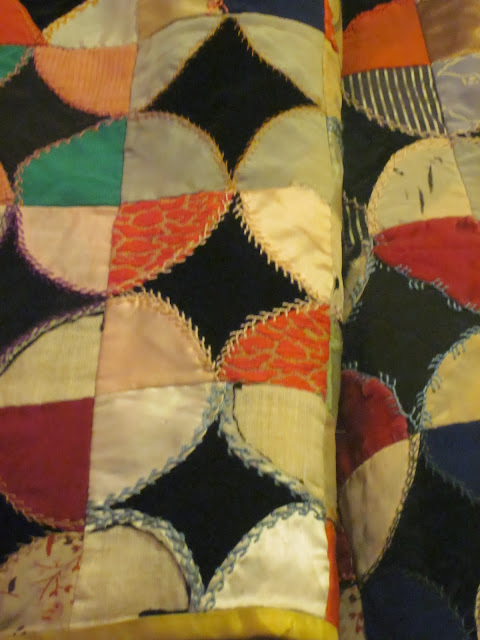 And a bit of stitch inspiration: 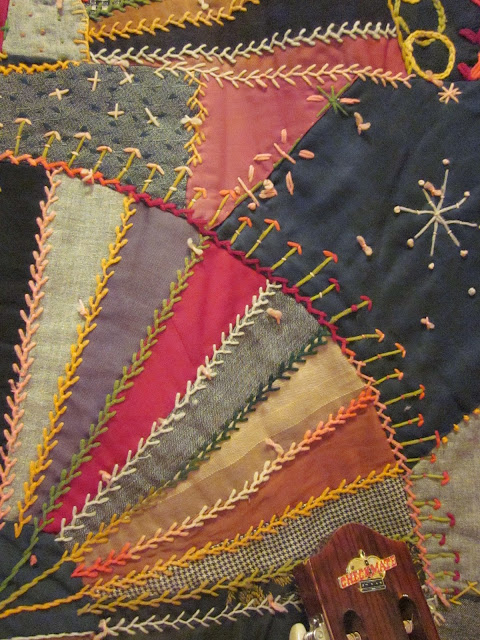 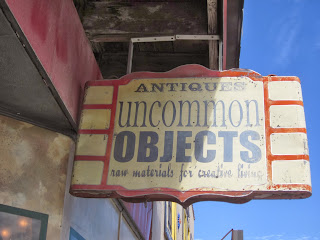 We are in Austin. What a place. Our girls moved here and there is much to see and do.

We stopped in an antique shop on South Congress. They call it raw materials - I noticed: 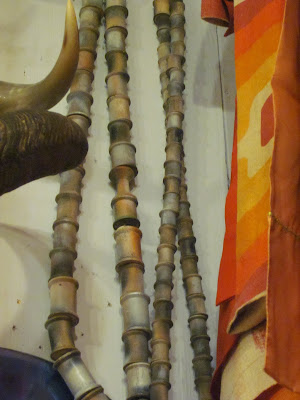 Last, but far from least, are these strings of wooden spools. I collect them. But I just keep them in containers - look how great they look all strung together and hung up.

I can't wait to do that when I get home. I'll probably find I need to collect MORE.
Posted by Deb Rowden at 3:44 PM 7 comments: