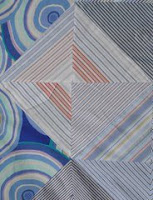 In the past year Rosemary Cromer became obsessed with SHIRTS.
She bought shirts at every thrift shop she passed. She made several quilts with shirts. She lent one for the gallery of my book. Another became part of the Country Living Classics Exhibit. Scraps became postcards for our guild exchange.
When I was at her house the other day she showed me the REAL reason she started working with the shirts: to make a quilt for her bed. It's so cool, look at the great setting triangles she is using. She opined that she was through with the shirts so I called her bluff. I said, cool, let me put them into a rug for you. OH NO! She wasn't ready for that. She instantly thought of a few more small projects she wants to use them for before she lets them go.
Rosemary got obsessed and has stayed obsessed. Good for her.
Posted by Deb Rowden at 7:00 AM