What good is having your personal newspaper if you can't run your own concert review? I promise we'll get back to quilts soon. 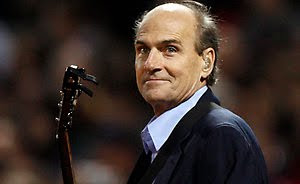 You'll notice I didn't blog about what I saw at quilt market. That's because I hurried home Friday for a concert, tickets a gift from my dear Betsy and Snow. James Taylor and Carole King!! James Taylor is my favorite. I was in the audience long ago when he played at the University of Kansas. And Carole King's Tapestry and incredible body of work have enriched my life.

So I wondered how this concert would be, so many years later. After all, they played at the Troubadour (the name of this reunion tour) in 1970. Would I be disappointed? Would they still be as great as they were then?

Well they were. At first you winced a little at the differences. Many things for sale in the lobby. A mega stage that rotated (very slowly) as they performed. A cast of characters along. Big screens all over, fancy lights. A far cry from that Allen Fieldhouse concert of James only with his guitar.

Their voices were as wonderful as we remembered. The cast of characters turned out to be (mostly) the crew that has produced work with James all along (Kootch! Lee Sklar and Russ Kunkel!) - with some new faces that threatened to upstage then at one point (the awesome Arnold).

What will stay with me is the joy with which they sang.  King was radiant and such a treat AND she looks marvelous. James clearly still loves his work. The big screens let us all see them clearly. The sound was awesome. They sang so many classics it all blurred together. They finished with You've got a Friend. And we called for more. It couldn't get better. but it did. Next they did Up on the Roof (holy cow!). And they closed with such a sentimental favorite. I do think James ended that 1970 KU concert with the same song. "You can Close your Eyes." Just he and the guitar and Carole King harmony.


There's a great review of the concert in the Star. We'd estimate there were 20,000 people there. We've read these tours are today's income for musicians, as record sales lag. We were fascinated to note semi trucks filling the block by the arena, likely how they haul the stage around. The tour was in Kansas City Friday night and Nashville the next. Their schedule is daunting.