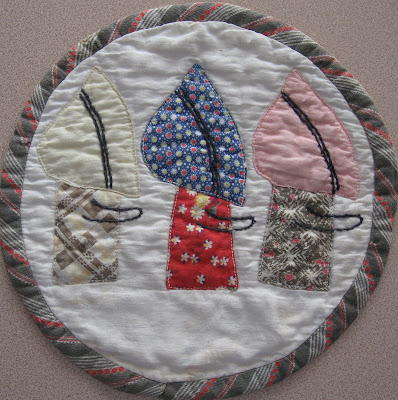 Sunbonnet Sue has long carried an air of scandal for me. After all, fanatic Sue quilt lovers in our guild did provoke upstarts to craft the infamous Sunbonnet Sue quilt made in 1979. So when a Sue quilt would appear at our guild in the aftermath, you would hear gasps of dismay that the controversy might be rekindled.

I won't take these goodies to show at guild as I don't want to be provocative. But I can show them to you here. Both are kitchen items. The round potholder above appears to be Sues in a trance, somnambulist Sues perhaps, following each other to who knows where. It was given to me by one of the creators of the infamous quilt..... 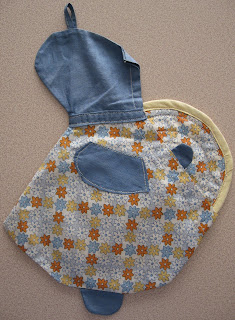 Oddly enough, another one of those upstarts passed on the Sue alone to me. What is the meaning of this one? After all, her bounteous skirt shelters 2 potholders. Could this be pregnant Sue? Mother of twins Sue?