Poppies in the final days of May 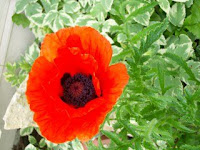 In 1991, my brother died on May 26. My mother had a poppy plant in her backyard flower garden, which my brother had often tended. It had never bloomed.
The morning of Bruce’s funeral, it bloomed. As we all dressed, we took a minute to go out and see it. And most of us reported having a little conversation with that poppy (mostly saying yoo hoo and are you really in there?).
When we came home from the funeral, all the petals had dropped off the flower. The bloom was gone. Again, we took turns visiting and saying our farewells.
I have a red poppy plant on the north side of my house. Because of the low sun exposure there, it blooms late, usually around May 26. Here it is this year, we can all say hi Bruce. We miss you.
Special thanks to Trapp & co for the continuing graveside flowers. They don’t forget….
Click to read more about poppies.
Poppies have long been used as a symbol of both sleep and death…
Posted by Deb Rowden at 11:30 AM