Be sure to see the Fractured Fabric Society Show 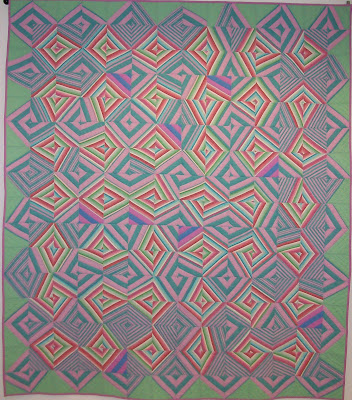 A creative quilting group has been meeting at Harper's Fabric & Quilt Company in downtown Overland Park several times a year for the past few years. Guided by the wonderfully creative Rosemary Cromer, it's called the Fractured Fabric Society.

A show featuring members' work is now up at the Lenexa (Kansas) City Hall, on 87th Street, several blocks west of the I-35 exit. I visited it last week and was bowled over by the creative work being produced by members of this group.  There is clothing. There are free-form quilts. There are postcards and quilts with bluejay feathers on them and chopped up embroidery....I could go on and on.

It's up through the end of March so you have a little more than one more week to see it. Don't miss it -  read all about it in this release. 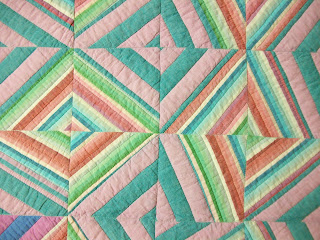 Rosemary's quilt, Muddy Pond in the Spring, is shown above and right. She was inspired by a similar quilt in Kaffe Fassett's book, Quilt Romance. Rosemary liked the way the use of stripes caused so much movement and that the technique was quite simple.
Posted by Deb Rowden at 8:20 AM