An Experiment with the Silly Rabbit 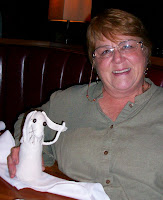 One of the projects in Maggie Bonanomi's new book, Nature, is this one called Silly Rabbit.

This little guy generates a reaction in all that see him.

Donna di Natale, the technical editor for the book, stitched up this sample. She took him to her knitting group. They dubbed him Scary Harry.

So Donna gave him to me and I decided to take him out for an opinion survey. 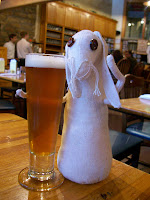 He went to lunch at Free State Brewery. Our waitress Kaitlin pointed out that "this is an example that even inanimate objects like our beer". She thought he was adorable but a little creepy but cute too. "There is something endearing about him," she said.

The opinion of a friend of my lunch companion was, "Oh My!" 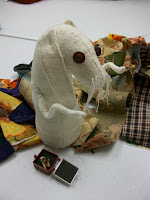 He went to stitch group. That seasoned bunch pretty much dismissed him BUT he did babysit one member's newly pulled MOLAR. 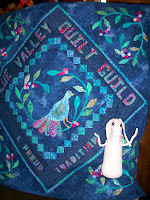 We took him to the Blue Valley Quilt Show in Kansas City. Many people were curious about him there. One woman called him a little rat with creepy arms. Another likened him to a praying mantis (!). Someone else said, "Maggie can get away with anything." He was called walrus like and kinda horrid. well! 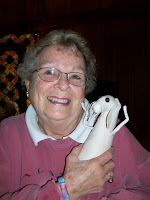 
His last foray was into my favorite thrift shop of all time, Maj-R Thrift in Grandview, Missouri. We photographed him at the checkout counter there and then left him behind. luckily I thought of him a few miles down the road and when I returned, he was waiting there for me, a bit forlornly. 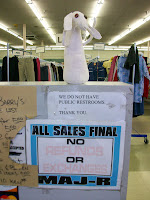 That is the end of his traveling adventures, I don't want to lose him. He graces my office desk now and I'm pleased to have the little guy around. I've always liked him. if you want to make your own, check out Maggie's book!
Posted by Deb Rowden at 9:05 AM