I read in this morning's New York Times that this is the 150th anniversary of John Brown's death by hanging on December 2, 1859. The author, David S. Reynolds of the CUNY, opines that John has been consigned to the loony bin of history.

One very good thing about living in Lawrence, Kansas is that history is quite lively and far from forgotten here. We remember John Brown's exploits often. We do know he was a wild man and did things that would get one into trouble. 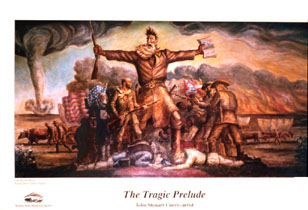 To celebrate this, we drink a beer named after him! We wear t-shirts with his famous image (the original 18 1/2" x 29" mural "Tragic Prelude"  by artist John Steuart Curry (1937-1942) hangs in the Kansas State Capitol - they sell a poster of it there too). I have a car plate with his image on it. 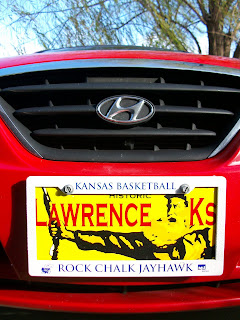 Sports events between Missouri and Kansas teams are often referred to as border wars. At last year's basketball game, KU students unfurled a huge banner with John's famous image on it - clutching our national basketball title trophy in one hand.

To learn more about John Brown and form your own opinion, read Reynold's article. Is a pardon due?
Posted by Deb Rowden at 8:42 AM