A red and white wedding gift 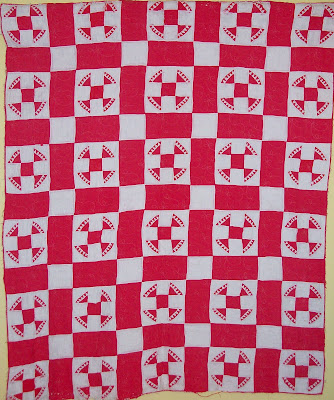 I like to get out my red and white quilts in December.

This one was given to me by my friend, Maxine Olson Burner. It comes with a sentimental story.

Maxine received this quilt in 1945 when she married First Lt. Sherman French. Maxine's mother asked a neighbor to make the wedding gift. Sherman, a pilot, flew into a typhoon near Iwo Jima and was declared missing in 1945, then officially dead one year later.  But our story has a happy ending. Maxine met Elton Burner several years later. They married in 1949 and were together until Elton died last year. Maxine's son Jeff had this quilt for a few years but when she found out he was using it for picnics, she took it back and gave it to me for safekeeping. And I'm keeping it safe. 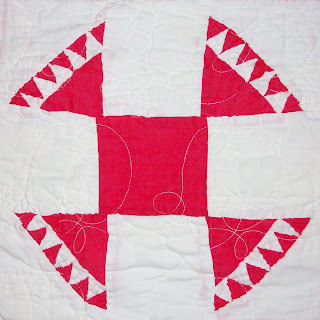 This quilt measures 63" x 74". The pattern is similar to the Wheel of Time block (#1796, probably in Comfort magazine) in Brackman's Encyclopedia of Pieced Quilt Patterns. There are 30 of these intricately pieced (the small triangles are only 3/4 inch long) blocks in the quilt, which is hand pieced and machine quilted.

Behind the scenes: Maxine called our house when my daughter Kate was little. Kate answered and reported "Backseat Burner" was on the line. "Everyone's favorite date!" declared my husband. We have called Maxine "Backseat" ever since, to her delight.
Posted by Deb Rowden at 10:25 AM