What I did Saturday night

Saturday night, I did something I have never done before. 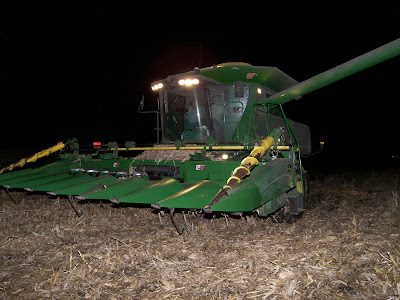 I rode in this combine harvesting corn, in the rich but soggy fields of central Illinois. We were having pizza at my Uncle Charlie's house and he said his boss Randy was still working and if someone wanted, they could ride along. 81-year-old Dad rode first, then I ventured out. I was nervous. It was dark, the combine and fields are huge. I climbed up the steps into Randy's very big John Deere and off we went. I had heard combine cabs were the lap of luxury, with tvs and loud music, etc. Randy's had the loud music and an amazing computer screen that showed where we were in the field, what kind of corn we were pulling in, how wet it was, how many acres he'd worked today....it just went on and on. I was so amazed.

We were up pretty high, looking down into the rows of corn crumpling as we passed. Looking backwards, I could see shelled kernels of corn shooting into the bin behind us. Before long, the back window view was blocked  by all the corn. From then on, we depended on the computer to tell us how full it was.

Suddenly, another trailer appeared beside us. The auger (a big pipe-like device) swung out and corn started shooting out of our vehicle into the truck! The back window was clear again! Keith Urban music was  blasting in the cabin! Randy was calling his co-workers on his cell phone! A possum scooted out ahead of the combine as we finished the row!! We came upon a cornless patch spot and Randy went wild speculating about why that was there. Lightning strike? Tornado? UFO??

Can you tell, I found it exciting. Here's a picture of my dad, with Randy in the middle and Uncle Charlie on the right. When we drove home to Kansas today, I saw the corn fields in a new way. 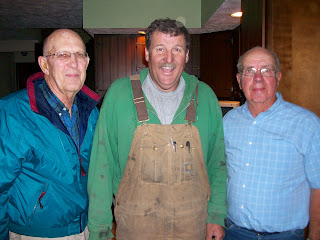