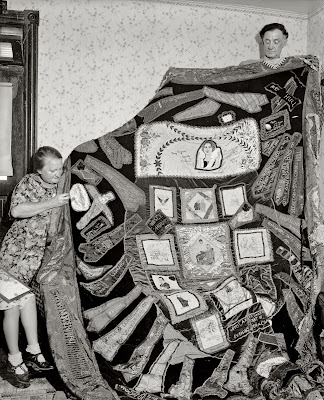 I'm speaking to a quilt guild in Topeka tonight about Memory Quilts, the topic of my latest book.
How I'd love to have this quilt along to show! I've seen a photo of it before, it's on the Library of Congress web site. Here's how they describe the quilt:

Washington, D.C., August, 1937. Joseph's coat of many colors had nothing on this unique quilt which is now being completed by Mrs. Ethel Sampson of Evanston, Ill., after six years of collecting. Parts of wearing apparel from President Roosevelt, Mrs. Roosevelt, members of the Cabinet, diplomats and notables from all over. From Hollywood Bing Crosby sent a tie while Mae West and Shirley Temple contributed parts of dresses. Former Emperor Haile Selassie's neckties and a linen of Winsor, are also included on the quilt. Diapers from the Dionne Quintuplets are also prominently displayed.

The folks at this web site have a very large version of the photo posted, check it out. You can even buy a print.

Where is this quilt today? I would love to know. And thanks to BB and MK for finding it and sharing it with me.